Welcome to Hybrid Team of the Week, a segment featuring weekly on Sporting HQ where we fill 18 positions on the ground with only one player from each team based on the weekend’s results. From the first to the final round, it’s 18 Clubs and 18 Players in one team of the week- it’s that simple.

So, let’s have a look at this week’s squad. 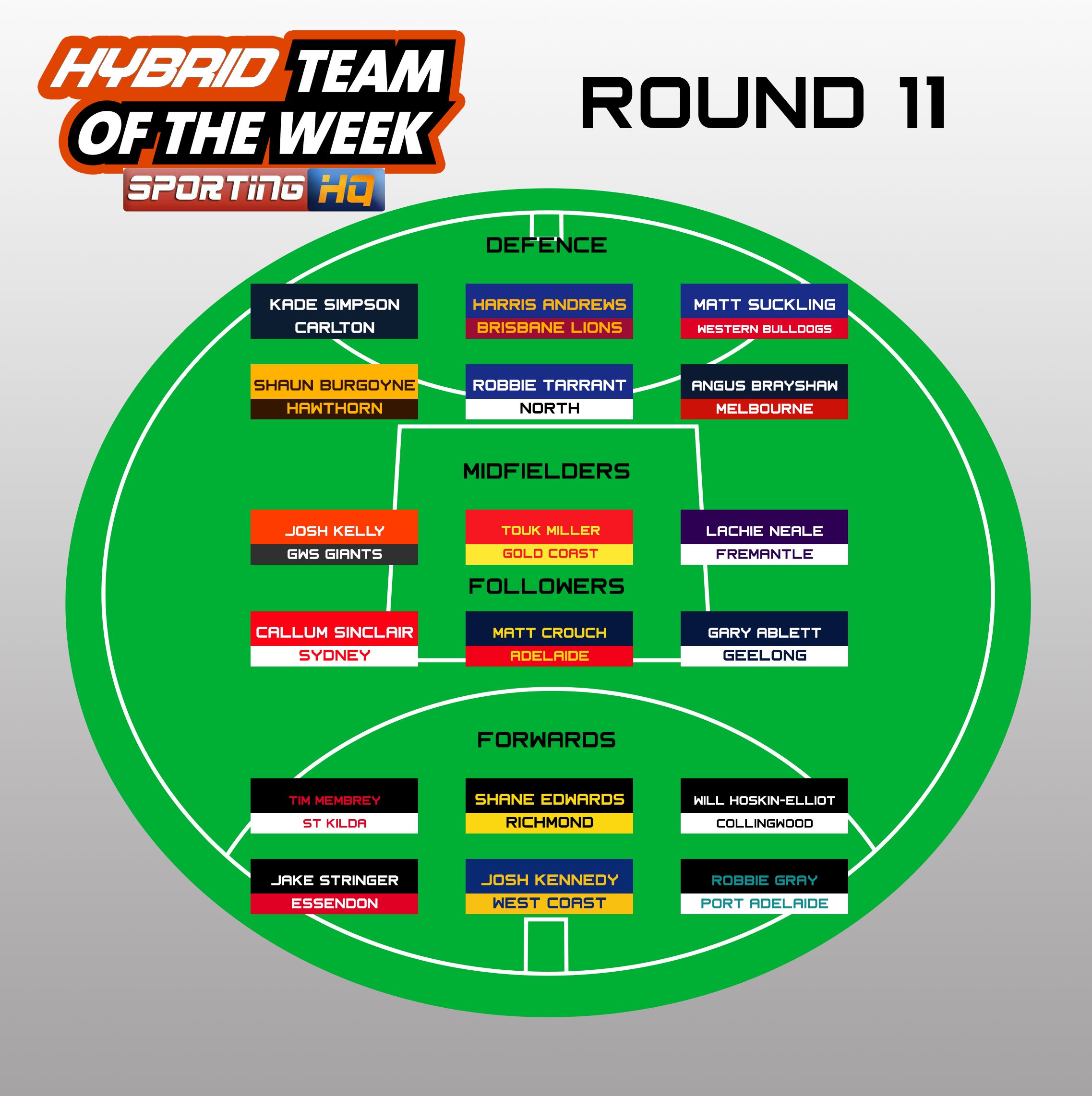 Simpson joins the Hybrid Team of the Week yet again off the back of another strong showing for the Blues, sliding into the back pocket position for the third week running. Simpson had 27 disposals and took four marks for Carlton in their loss to the Swans on Friday night.

Another new inductee into the Hybrid Team of the Week is young Brisbane Lions defender Harris Andrews, who shut down North Melbourne live-wire Ben Brown at Full Back in Sunday’s match against the Kangaroos, restricting him to just two goals.

Making up the full-back line of Round 11’s team is Bulldog Matt Suckling, who was named the best from his side following his 26 disposal and three mark performance against Melbourne at Docklands. Suckling joins the Hybrid Team of the Week following a short hiatus, first making the team in Round 4.

Kicking off this week’s Half-Back line is Hawthorn veteran Shaun Burgoyne at the Half Back Flank, who had 26 disposals, six marks and three tackles in Hawthorn’s thrilling come- from-behind win over Port Adelaide in Launceston. Hawthorn now stay in the mix for finals contention after snapping their losing streak.

Tarrant slots into the Centre Half Back position after a solid showing for North Melbourne in their 54 point victory over the Lions, compiling 21 disposals and five marks to join this week’s Hybrid Team of the Week, joining Burgoyne on the Half-Back line. The 3rd pick of the 2014 draft is certainly starting to fulfill his potential, with another blistering performance in Melbourne’s victory over the Western Bulldogs. Brayshaw had a phenomenal 39 disposals and eight marks to join the Hybrid Team of the Week on the other Half-Back flank.

Josh Kelly of GWS slides into the wing position for Round 11’s team, after the young Giant scooped in 31 disposals in his side’s crucial victory over Adelaide on Sunday afternoon. Kelly is a vital cog in a Giants team that will be pushing for a September berth following some crucial injuries to star players.

Touk Miller is this week’s centre of the Hybrid Team of the Week after the Sun compiled 27 disposals against Geelong, in what was his team’s first match back at home following the Commonwealth Games. Miller showed he may be able to fill the boots somewhat of the departed Gary Ablett in the midfield for the Suns, who played his first match against his former team on Saturday.

Neale was once again prolific for the Dockers in their loss to Collingwood on Sunday, racking up 29 disposals to secure himself a position on the wing in this week’s Hybrid Team of the Week, despite his side’s 61 point loss to a rampant Collingwood outfit.

Sinclair starred in the Ruck for the Swans in the spotlight of Friday Night Footy, picking up 22 disposals, seven marks and 26 hitouts in what truly was a best-on-ground performance, and what also was a performance worthy of a call-up to Round 11’s Hybrid Team of the Week.

As usual Crouch was prolific for the Crows in the midfield, picking up disposals seemingly for fun in the Crows’ loss to the Giants on Sunday. He had 36 disposals, half of which were contested, and also laid five tackles for the Crows, earning him a position in Round 11’s Team of The Week.

Ablett proved his genius to the fans who he had left on the Gold Coast, tearing apart the Suns with 37 disposals, six marks and three goals for the Cats in their 85 point demolishing, proving that despite his age he can still dominant opponents.

Membrey was outstanding for St Kilda in their narrow loss to league-leading West Coast, slotting through six straight majors in what was easily his best performance at AFL level so far, nearly managing to steal the game from the Eagles who had lead by as much as 48 points at one stage.

Hoskin-Elliot slotted through six goals for the Magpies in their big victory over the Dockers on Sunday, warranting his selection in this week’s Hybrid Team of the Week. It will be interesting how he and Collingwood respond in next Monday’s Queens Birthday clash against Melbourne, whether they will bring their best form to such a big game or not.

In the forward pocket for Round 11’s Team of the Week is Jake Stringer. The much maligned Essendon star was influential for the Bombers despite their big loss to Richmond on Saturday, picking up 29 disposals and five marks. Kennedy joins the Full Forward position in this round’s Hybrid Team of the Week, after the West Coast spearhead returned to form in magnificent fashion by kicking six goals, giving the Eagles a tenth straight win for 2018. Kennedy will need to continue his hot form with injury to other key forward Jack Darling.

Joining Stringer and Kennedy is Port Adelaide’s Robbie Gray, who continued his great 2018 with another strong performance. The Port Adelaide goal sneak was once again influential for his side, slotting through four goals for the Power in their narrow loss to the Hawks in Launceston.