Welcome back to Hybrid Team of the Week after our short break in the bye rounds. This is a segment where we fill 18 positions on the ground with only one player from each team based on the weekend’s results. From the first to the final round, it’s 18 Clubs and 18 Players in one team of the week- it’s that simple.

So, let’s have a look at this week’s squad. 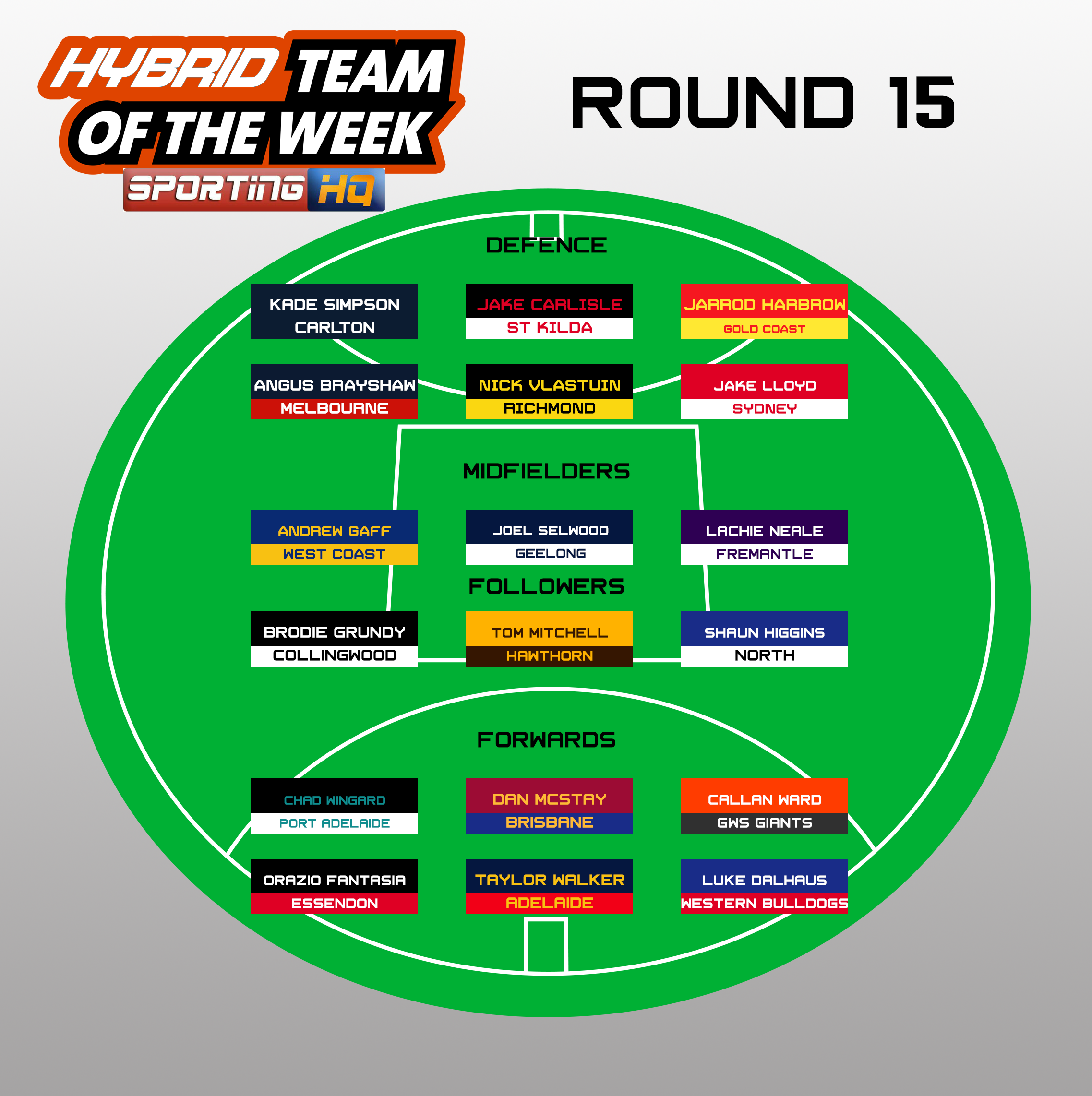 The Carlton champion in his 300th game for the club was as usual at his best for the Blues, racking up a mammoth 37 disposals, three marks and 112 fantasy points in his milestone match. Simpson joins a select group of Carlton greats to have surpassed the 300 game mark, however he and his team could not muster a victory against Port Adelaide on Saturday.

Carlisle was vital in St Kilda’s upset victory over Melbourne on Sunday, picking up 22 disposals, nine marks and 88 fantasy points as his side held off a fast finishing Demons at the MCG.

Harbrow was dominant for the Suns in their loss to Collingwood on Saturday, compiling 29 disposals, 12 marks and 121 fantasy points off the back-line for a Gold Coast outfit who has struggled to play consistent footy over season 2018.

The Demons youngster was terrific in his side’s narrow loss to St Kilda on Sunday, bringing in 27 disposals, six marks and two goals in an effort which nearly dragged the much-fancied Demons over the line in the narrow stages of the match.

Vlastuin continued his sharp form in season 2018 with another exceptional showing for the Tigers, this time against fellow premiership contenders in Sydney. Vlastuin had 21 disposals and 10 marks in a Richmond victory that consolidated their place on the top of the AFL ladder.

One of the many good players in Sydney’s gallant loss to Richmond on Thursday night, Lloyd was especially prolific for the Swans with 34 disposals, eight marks and three tackles despite his side’s 26 point loss.

Gaff joins the Hybrid Team of the Week on the wing for this week, showing his supreme ball-winning skills in West Coast’s loss to the Crows on Saturday. Gaff picked up 37 disposals and had 148 fantasy points for an Eagles team who has now lost their past three games, losing their grip from the top four.

The courageous Geelong captain was at his usual best on Friday night with 34 disposals, six tackles and 120 fantasy points in the Cats’ thrilling loss to the Western Bulldogs after the siren. The loss possibly means the Cats may struggle to make the top four, however if Selwood keeps putting in similar performances to this they might still get there.

In a disappointing loss to the Lions at home, Neale was one of only a small group of Dockers players who stood up, raking in 31 disposals, six tackles and 109 fantasy points against the feared Brisbane midfield duo of Beams and Zorko.

A regular in the Hybrid team of the Week in the ruck, Grundy dominated the Gold Coast Suns in the ruck with a mammoth 49 hit-outs and 23 disposal as he pushes for All-Australian selection and Collingwood push for a top-four berth.

Continuing to astound the football world, the Hawthorn ball magnet reached the herculean 50 disposal mark yet again in his side’s loss to GWS on Sunday. Mitchell was phenomenal for the Hawks, with nine marks and 13 tackles to go with his impressive haul of disposals, along with a staggering 195 fantasy points in what was a special game from the former Swan.

Higgins asserted his claim as North Melbourne’s top midfielder and arguably as one of the best midfielders in the competition with 31 disposals, six marks and 105 fantasy points in the Kangaroos’ loss to a resurgent Essendon outfit buoyed over its upset victory of West Coast the week prior.

Wingard joins this week’s team of the week on the half-forward flank thanks to his display of 24 disposals, six tackles and two goals against the Blues on Saturday at the MCG, thwarting Kade Simpson’s special 300 game celebrations.

Usually found at the opposite end of the ground at Full Back, Mcstay was a sensation for the Lions up forward in his side’s big victory over the Dockers in Perth. The Brisbane big man had a game to remember, taking six marks and slotting three goals to give Brisbane their second win of the season, more importantly lifting them above Carlton at the bottom of the ladder.

The Giants’ inspirational captain showed why he’s one of the best in the game with 32 disposals, six tackles and 125 fantasy points for his side in their important victory over Hawthorn at home. The win puts the Giants into the eight, with a chance of consolidating that position with a win over West Coast in Perth this week.

Dahlhaus slots into the forward pocket of the Team of the Week off the back of a sublime performance in Friday night football. In what was a tightly fought match, Dahlhaus was one of the Bulldogs players who stepped it up in the tense scenario that was the final term, picking up 29 disposals and eight marks along with 115 fantasy points in the thrilling win.

“Big Tex” lead from the front for the Crows, getting his side over the line despite trailing West Coast by 20 points at three quarter time. Walker took 10 marks and kicked three goals in a performance which guided Adelaide to victory, snapping the club’s five game losing streak.

Fantasia was simply superb for the Bombers in the goal frenzy that was their clash against North Melbourne, slotting through four important goals, while also laying five tackles and amassing an impressive 103 fantasy points to give the Bombers yet another victory, edging them closer to the top eight.