Welcome to Hybrid Team of the Week, a segment featuring weekly on Sporting HQ where we fill 18 positions on the ground with only one player from each team based on the weekend’s results. From the first to the final round, it’s 18 Clubs and 18 Players in one team of the week- it’s that simple. 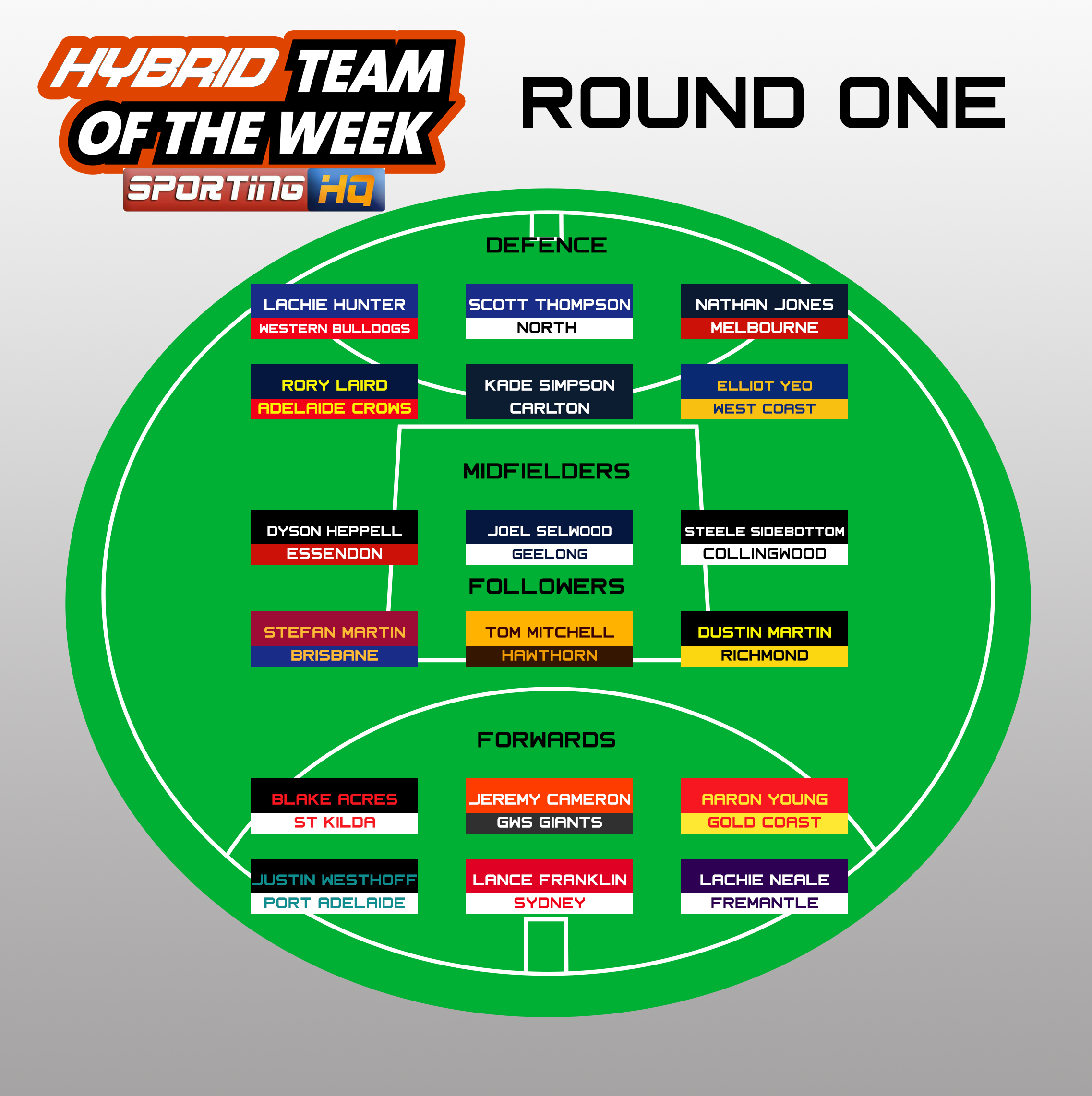 Hunter was a rare shining light for the Bulldogs in what was a tough day for his side as they went down by 82 to GWS. Hunter compiled 32 disposals and 108 Fantasy points from defence in what was a stellar performance despite his side’s big loss.

Thompson had a game high of 16 one-percenters as his Roos fell by 16 points to Gold Coast in the wet at Cairns. He also managed to hold his opponent in Sam Day scoreless in what proved to be very challenging conditions, as persistent rain dogged the match.

The Melbourne captain proved once more why he’s one of the best in the game, with a team high 29 disposals and six inside 50’s nearly enough to get his Demons over the line against Geelong.

Laird was prolific in defence for the Crows, notching 40 disposals from defence, along with eight marks and an elite disposal efficiency of nearly 88%. He has truly become one of the league’s best attacking half backs.

Simpson was Carlton’s major source of drive on Thursday night against the reigning premiers, with a game high of 10 rebounds from defence and 35 disposals giving Carlton plenty as they challenged a determined Richmond.

The John Worsfold Medalist of 2017 continued on his stellar form of last season with yet another blistering display. Yeo finished with a team high 104 Fantasy points with 26 disposals.

Essendon’s captain was simply unstoppable on Friday night against the Crows with 35 disposals and a game high 13 marks to lead his side to victory following a stunning final term comeback.

The fearless Selwood amassed 39 disposals and 122 Fantasy points in his side’s thrilling victory over Melbourne on Sunday, proving he’s still worthy of the elite tag after a some what quieter 2017 season.

Sidebottom was prolific as usual for the Magpies in their disappointing loss to Hawthorn on Saturday, with 31 disposals and six clearances for the midfielder.

Martin dominated in the ruck against the Saints, scoring a goal and winning 42 hitouts across the vast expanses of Ethiad Stadium as he gave Lions midfielders like Jarrod Berry and Lewis Taylor first use of the ball.

An almost super-human performance from the Hawthorn midfielder, with a league record 54 disposals against Collingwood on Saturday. Mitchell passed champion Greg Williams’ VFL/AFL record late in the final quarter after one stage being on track for 60 touches in what was a monumental effort from the former Swan. Where was the tag from Nathan Buckley?

The best in the league followed on from his Norm Smith Medal winning performance last September, continuing his awesome form with 32 disposals and a miraculous goal as his Tigers got their 2018 premiership defence off to a perfect start.

The young Saint was at his best in St Kilda’s 25 point victory over Brisbane at Ethiad, compiling 30 disposals and a goal to his name in a performance that will certainly turn heads.

The Bulldogs defence had no impact in curtailing Cameron, who booted six goals and took nine marks as his side demolished the Western Bulldogs in Canberra.

In his first game as a Sun, Young was terrific, proving his worth as a recruit. The former Port Adelaide Utility picked up 26 disposals, with nine tackles and a goal to his name.

Justin Westhoff (Port Adelaide)
The man they call “The Hoff” dominated in Port Adelaide’s big 50 point victory over a dismal Fremantle, with 130 fantasy points as the big man drifted across Adelaide Oval gathering possessions at will, with 25 touches and nine marks in what was a complete performance.

Lance Franklin (Sydney)
Franklin tore apart West Coast with a stunning display of 8 goals at Full Forward, proving he is easily the most dominant forward in the competition right now. The bag puts Franklin at 868 goals as he attempts to become the first left footer to 1000 career goals.

Neale was one of a minority of Dockers who impressed in their big loss to Port Adelaide at the Adelaide Oval on Saturday. Neale picked up a game high 38 disposals, changing from the Midfield to the Forward Line that saw limited opportunities in Fremantle’s 50 point loss.